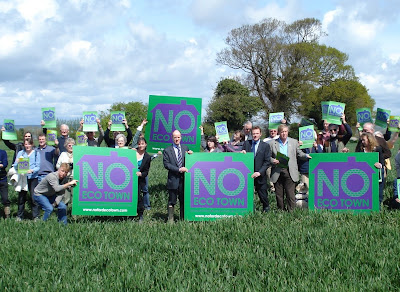 CAFE has been set up by members of the local community, including residents of Ford, Yapton, Climping and Arundel, backed by Arundel & South Downs MP Nick Herbert and Bognor Regis & Littlehampton MP Nick Gibb.

The launch took place in Yapton on a footpath overlooking the site of the proposed ecotown. It was attended by members of CAFE including Co-Chairman and Yapton resident Terry Knott, supporters from the local community and MPs Nick Herbert and Nick Gibb.

A new CAFE leaflet and petition was available at the launch, copies of which will be distributed to households in the area during the next few days.

CAFE has been formed in response to the announcement on 3 April by Housing Minister Caroline Flint that Ford has been shortlisted for an eco-town, along with 14 other locations around the country. Of the 15 sites that have made the shortlist, the Government anticipates that 10 eco-towns will be built. Five will be built by 2016, the remainder by 2020.

At least 5,000 houses could be built on land around the former Ford Airfield site, most of which is greenfield land.

Terry Knott commented: “I have lived here 20 years and am very much involved in the local community and its economics and ethos. I believe this eco-project to be deeply flawed. Its’ alleged need is based on highly questionable government statistics, it will swamp the local community, will be boxed in by the railway and an already overloaded A27 and it does not even make economic sense, for the very people it is supposed to help.

“The government has mixed up hectares and acres in its submission documents and, in short, it is a half-baked idea, with nothing to commend the site at Ford.”

Climping resident and CAFE Campaign Coordinator Susan West commented: “We should be building homes in more appropriate and sustainable locations, where people want to live and work, not on a greenfield site miles from amenities and without adequate transport links.”

Climping resident and CAFE campaigner Geoff Dixon commented: "Once people understand the sheer size of this development, they will be very worried about the impact it will have on their lives and environment. It's great to have so many asking how they can get their voices heard against the proposals to build on the fields between our villages."

Nick Gibb commented: "This is a campaign that is backed by the whole community who are fearful of the impact 5,000 new houses across a huge area of land from the border of Yapton to the River Arun will have on our environment.

“It is a campaign determined to fight the vandalism that a new town will have on this green space, the lungs for the people of Bognor Regis and Littlehampton as well as a beautiful landscape for Arundel, Climping, Ford and Yapton."

Nick Herbert commented: "The whole community is coming together to oppose an eco-town at Ford. We have to get the message across that this huge new development on greenfield land won't just affect Ford, Climping and Yapton - the traffic, increased pressure on public services will impact on other villages and towns not far away including Arundel, Bognor and Littlehampton."

Mr Herbert added: "I hope that as many people as possible will sign our petition, join our march on Saturday 7th June and write to the Government to protest against this dreadful plan."

If you wish to contact me please do - I check email occasionally - so it may be a while before I respond.
Email: MR GUMMIDGE with your details

A big thanks to all the people who signed petitions, wrote letters, and marched! Time to celebrate - you did us proud!
A special BIG thank you to the following:
Vicky Newman
Terry Knott
Derek Waller
Nick Herbert
Nick Gibb
Matthew Jones
Geoff & Ange Dixon
John & Mol
Susan & Brian West
Big Ron Field!
Patricia
and finally...
that pesky scarecrow?
If I forgot you email me and I'll add you in...

Click here to view an interactive map of the Ford Eco-town site.